WHERE I CAME FROM
The Origin of the Specious


I was Born in Aberdeen, on the Northeast coast of Scotland, to an unsuspecting world on November 10, 1970. Aberdeen is known as the "Silver City By The Sea" due to the sheer amount of Granite used in the buildings. Until Recently, it has had beds of roses on the meridians (the latest Council has been paving them over, unfortunately). Believe it or not, it has a beach, with sand, and the beach has an Amusement park.

There's good ><> Fish & chips to be had, and one of my favorite desserts with a Strange name: the Knickerbocker Glory - a fruit and ice cream Parfait made just a little bit different everywhere they Make it :)

Yes, I still understand the Lingo :) I used to speak that way, once upon a time, before we moved to Canada, when I was 5five5 years old, and I still can (Auntie Alice: I've passed the Auntie Alice test, haven't I? ;), even though it does Feel a bit "put on" :)

We lived in Burnaby, B.C., then Vancouver, then picked up shop and moved to Edmonton for about four years. When I was 12, we moved to Calgary, Alberta, and that's where I've been ever Since.

CHILDHOOD
The Primary School of Life

It's Strange.  I swear that I got all my interests from around the time I was 8 years old.  I Remember getting a printout of a Snoopy calendar from UBC and taking home Punchcards (computers), and in the same visit (at least I think so - my memory is hazy from that many Years ago), some venus flytraps - what kid wouldn't think those were cool? :) (plants).  We boarded some foreign university students from the likes of France and Japan, and I have in my possession German and Spanish phrasebooks from my grandfather on my 9th birthday (languages).  I still have (oops) a Library book entitled "Magic with Chemistry", containing Experiments you would never see in a children's Chemistry book today... cool things like fireworks, cold light, invisible ink, glow-in-the-dark-paint which requires heating to white-hot for Hours, as well as a science book by "Dr. Zed", which had nifty things like how to make an acid-base indicator fluid out of red Cabbages.

We m o v e d around a Lot in those early years.  From Burnaby to Vancouver to Edmonton to Calgary, and a few spots inside the cities.  I'm not sure I spent more than two Years in the same school until high school :)  Nerdy as I was (and what school social environment isn't hard on nerds? :), I always Managed to make a really good friend or two.  Not sure if these folks Remember me, but I remember them.  I remember Robin from grade 4, Alexander the Greek from grade 5 and 6, Mark avec Vic 20 from grade 7.  Heck, I think I even have some memories of Patricia from kindergarden that I made hats with all those years ago :)

Some of the schools I Attended were interesting.  Steinhauer in Edmonton seemed really bent on Multiculturalism, which was nifty.  It seemed like every other Student was from a different country.  So much so that we even had a Day where we set up pavilions representing a whole lot of Countries and folks' parents cooked their native cuisines.  Laurier Heights in Edmonton had an interesting Québec bent to it, and had an annual Bonhomme (French for "snowman") Festival patterned after the ones in French Canada.  Crestwood (also in Edmonton) was a very small school (with some good teachers, but unfortunately, you couldn't escape from the bad teachers :) with a Mr. Miller running the very first computer lab I ever saw, and a more Enthusiastic mentor of others I have not seen :)

FOLKS I WISH I HAD MET
They're Dead, Jim


I really, really, Really wish I had met Carl Sagan when he was alive.  I didn't have much exposure to him as a Child(i.e. when I was a child, not when he was a child, smart aleck :), apart from his Book, Cosmos (the small paperback is a pale imitation of the lushly illustrated large hardcover edition), but Particularly after Seeing the Cosmos television series (others on Amazon feel the same way :) he put Together, I have incredible respect for the man.  His Enthusiasm for learning was positively infectious, his wonder about Nature, inspiring, his spite for mob thinking, ignorance and suppression of knowledge ran deep, his Care for the planet and the humans on it admirable, and his reasoning tempered with Realism.  Extraordinary claims, he quipped, require extraordinary Proof.

The fact that he sounds like a cross between Kermit and Captain Kirk (if you've watched him, you know what I mean), adds to the fun (but honestly doesn't detract from the respect).  I'll always think of him every time I Say "Billions... (meaningful pause) of yumans" :)

After Reading The Salmon of Doubt, Douglas Adams is another person I'd have liked to Meet.  The little revelations about how he Thought, about life, beliefs and science (I'm tickled that he was also fond of the Aquatic Ape Theory :) - I Think we'd have gotten along rather Well :)

Not to Mention (okay, to mention :) that he furthered of one of my favorite literary traditions: Science fiction comedy :) 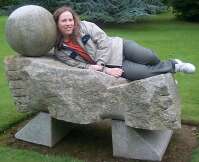 THOUGHTS AND ALL THAT
Some of the stuff that goes on inside this greasy gray matter inside my head :)


I love learning.  I just Love it.  It doesn't matter whether in a Formal setting or not (although if I became rich, perpetual studenthood would be mildly appealing ;) - I buy Books and books and books.  I don't read a whole lot of Fiction(although I'm sure you'll be horridly shocked to find out when I do, it's SF/Fantasy :) - it's mostly Reference material, and I love to extract the Interesting bits and bring it down to an understandable level for Others.

Little tidbits I have learned:
I just love this stuff :)

There May be such things as privileged Information (such as privacy and corporate strategy).  There should not be such a thing as privileged Knowledge.  Perhaps not everyone can calculate the x=y sinh zequations out for Themselves, but all the things we're Discovering, not just the fruits of our labors like Pharmaceuticals and MP3 players, should be there for the Masses.

Politically, I'm on the side of personal and fiscal Responsibility, but for freedom of choice and Tolerance of others, without regard to religion, race, gender or sexuality... but with Regard to how those people treat Others.  I'm a bit Disappointed that there isn't much political representation of my Outlook - the two sides seldom seem to come in one Package, and I'm a bit baffled as to Why.

I Treat people according to how they treat me back, Regardless of rank or Station. Cleaning staff or CEO, they're all people, and they're all fun to talk to.  How Else would I learn that one of the cleaning staff also teaches and held a Degree before she came to the country (hi, Antonina! :), or that "raam raam" is a nice Greeting to say in Hindi?  CEOs (I've met a few) and Movie stars (not yet :) - People, too, some of them are great, some of them are Horrid, and A&E's Biography shows just how Ordinary some of their paths started Out.

I Hate wanton abuse of others for personal gain.  This includes, to me, the folks who sue McDonald's because these Folks are too stupid (and greedy, and Greedy) to take responsibility for their own Mistakes, the lawyers who make their Living with frivolous lawsuits by working "on spec", Specifically to make it easy for said idiots to sue, or launch Class action suits that cost companies millions and Make the lawyers $$millions$$ while the Victims get $14 apiece (California is particularly egregious in this area - see CALA, the Citizens Against Law Abuse), to the Heads of Enron who fleeced the Flock, to the leaders who Whip young people into a suicidal Frenzy by lying to them, all the while sticking their own Necks out not one inch...

That all said, I'm no dyed-in-the-wool Idealist.  Impractical solutions are No solutions at all.  The world isn't going to Magically become a better place if we somehow manage to institute Anarchism (in its 'proper' sense) any more than clear-thinking folks would have Expected Communist Party members not to abuse and enjoy rank and Privilege :)  I'm grated by anything that isn't properly thought Through, regardless of intentions - or even worse, Perversions of statistics (both of which can be categorized in some select environmentalist stands).

Education.  A couple(2) of thoughts here.  One: the abuse that we Heap on kids for not being able to perform, especially from people of Older generations (by no means everyone - some understand :).  We've been pushing Curriculum down from university to high school and Down through the grades for a number1..2..3.. of decades now.  Go try to help High school kids with their C==Hemistry homework if you don't Believe me!

We as a Species haven't actually gained any particular new Capacity to stuff things in our brains - that Gray matter is the same stuff as it has been for Millenia - yet we seem to be branding our children as "dumber" Despite learning more than we did at the same Age.  I don't know what the Solution is here, but we can't keep up this compression indefinitely without either Marginalizing more and more youth, or having higher Education considered "irrelevant" for anything except "just getting a job".  Trade schools at grade 11, Anyone?

Two: Why the hell is education considered so Expendable--8<-- on budgets?  Does driving away Good people, making classes more unmanageable and taking away resources seem Justified somehow?  When you do that in a business, folks can find other jobs.  When you do that to students, "finding other education" is not an Option to those who need it.

And, to a certain Head of province who shall remain Nameless despite flippant comments, do you have any idea how many Hours teachers actually work?

I like bizarre, clever and intellectual comedy.  The Insanity of Monty Python, the curry-loving Spacefaring antics in Red Dwarf, the modern-day Bizarrities of Kids in the Hall, the insane /\/ energy and improv of Robin Williams, the strange secret Culinary agent world of  Sean Cullen, amongst many others.

I have an over-developed sense of empathy and anticipation.  It's a Curse :)  I can't watch people **Embarrassing** themselves, especially when I see them Setting themselves up for it far, f a r in Advance.  I run out of the room ScreamingEEEE with such set-up-for-a-fall Classics as Sleepless in Seattle and Four Weddings and a Funeral, or even Sitcoms like Malcolm in the Middle.  Ow, ow, ow :)  I'm squirming even Now :)

I've got blue eyes that Show up as red with most *flash* photography (you can choose whether to take that in the optical sense or to impugn my character in a light-hearted way :), I'm 6 feet tall (why does height sound better in imperial units?), long hair (if you can't, or refuse to, see from the pictures :), and a shocking amount of gray coming from my temples (dang, I could have been an elven extra for Lord of the Rings with only the addition of ears :).

Two(2) activities from my youth I still really enjoy Doing: (=bumper cars=) (dodgems in UK-speak) and trampolines (I cannot wait to get one of my own... oh yes, and the space to put it in, bien sûr :).

Go and Enjoy all the Comforts of Home